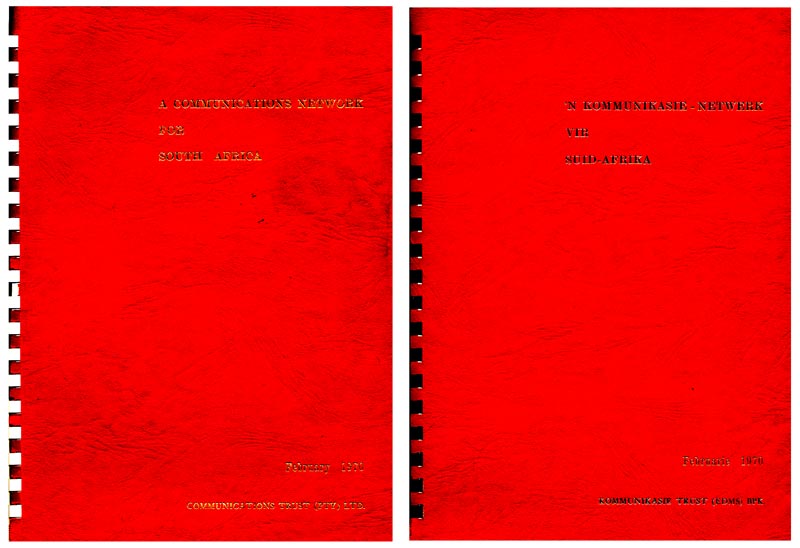 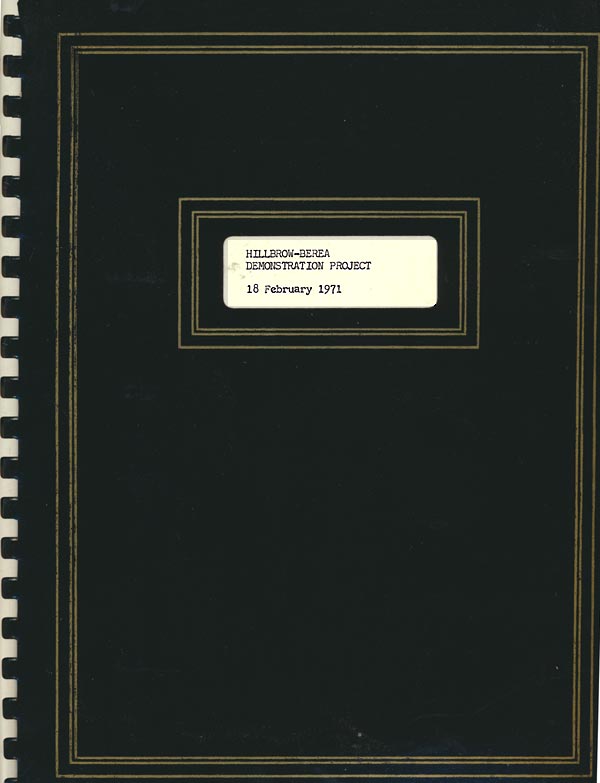 After Frank Merklein showed me around Brookhaven TV he said he was very busy and he asked for my help in preparing the report for South Africa. The objective was to get the industry away from the government run radio system and make it a commercial enterprise and that would be done by proposing something completely different. Our report was to propose the distribution of television through a cable system, and we would use the report to demonstrate our expertise in the field.

There was no television in South Africa at that time, but the South African Broadcast Corporation had introduced FM radio broadcasting by stating that they would be using transmitting towers for FM in anticipation that they would also be used for television in the future. The investors who had contacted Frank were lead by André Pieterse who headed the largest organization for film distribution and theaters and he was joined by the heads of both the English and Afrikaans newspapers who all felt that they would be losing revenue when TV eventually came to South Africa. They wanted to get in on the act, and it helped that the leaders were very influential in South Africa, in fact André’s father-in-law was a member of the national Senate.

I agreed to help Frank with the report, but in fact ended up doing most of the research, guided by Frank’s knowledge, and writing the many drafts of the report. I worked on the report for the rest of 1969, studying the geography of South Africa, having many discussions with people in the industry and vendors of the equipment that would be needed, including trips with Frank to Washington, Philadelphia, Chicago, and San Francisco.

I was quite busy with the cable TV discussions, securing maps of South Africa and getting a deep understanding of the political situation there. South Africa was colonized by the English and Dutch in the seventeenth century. English domination of the Dutch descendents (known as Boers or Afrikaners) resulted in the Dutch establishing the new colonies of Orange Free State and Transvaal. The discovery of diamonds in these lands around 1900 resulted in an English invasion which sparked the Boer War. Following independence from England, an uneasy power-sharing between the two groups held sway until the 1940s, when the Afrikaner National Party was able to gain a strong majority (through all-white elections). Strategists in the National Party invented apartheid as a means to cement their control over the economic and social system. Initially, aim of the apartheid was to maintain white domination over the 80 percent black and colored population, while extending racial separation. Starting in the 1960s, a plan of “Grand Apartheid” was executed, emphasizing territorial separation and police repression.

Our proposal was to bring TV to South Africa through local cable TV systems, interconnected by microwave links. Cable TV in the United States was simply a means of redistributing high quality signals of over-the-air broadcasts, and the local cable systems were interconnected by microwave because TV distribution by satellite interconnections was not yet available. We proposed a wired system of 24 channels, and emphasized that ten of those channels would be assigned to education for a full curriculum in all grades. Each area would have broadcasts in various languages and subject matter according to its population needs, including the multitude of native languages. Technology at that time did not allow more than 24 channels, but we envisioned having several different cable systems in one area when there were different needs by various ethnic or occupational groups. The film industry would get a share of the system to be able to sell cable access to its pictures on a subscription basis.

With the draft of the report completed, in January 1970 I went to South Africa for a month to prepare the final report with the leaders of the organization and staff at André’s company. I routed my flight through Norway to have a pleasant visit with Hilde and her family. While in South Africa I also had an opportunity to visit my cousin Angelina Heller and her husband Hans and young son Christian.

Again, I reviewed what I had written and we made changes and expansions, and the staff in South Africa started preparing the final copy of the report. In February 1970 the inch-thick reports, with separate copies in English and Afrikaans, were submitted to the South African Broadcasting Corporation.

While I was there in South Africa we discussed the business structure, Communcations Trust (Pty.) Ltd was formed, and we agreed to the share that Frank and I would have.

In March 1970, when I returned to the US, Frank and I formed a partnership, Redbook Associates, to be the registered owner of our ComTrust stock. From December 1970 to June 1971 we were issued 286 shares of Communications Trust (Pty) Ltd. and I still have the stock certificates, now (presumably) worthless.

I went back to South Africa again for a final board meeting and discussions of the status of the project in late November and early December 1970. While I was to go south, André was coming to the US so we agreed to meet in Rome. Fortunately, Paul Greenfield was studying in Rome at that time, so we had a chance to get together for a few meals and a little sightseeing. As before, the plane trip entailed numerous stops along the way at cities that I could name but never got to see.

While the government was reviewing our proposal we started working on other proposals. We decided to also propose a demonstration project in the area of Johannesburg where Angelina lived, Hillbrow-Berea. I worked on that report for a month or so and sent the preliminary draft to South Africa. Over the next nine months we had many letters back and forth on changes and financial projections of the project, and discussions of other projects. Many hours were spent in discussions with possible investors in ComTrust, as well as equipment suppliers.

Discussions continued after my December trip until, in July 1971, the Republic of South Africa announced that they would begin construction of broadcast television (rather than cable.) In late 1975 SABC started broadcasting, and had just one channel for several years.

In 1981, a second channel was introduced, broadcasting in African languages such as Zulu, Xhosa Sotho and Tswana. The main channel, now called TV1, was divided evenly between English and Afrikaans. Even to this day, subtitling on TV remains almost non-existent, the assumption being that people have no desire to watch programs in languages they do not speak.

In 1986, the SABC’s monopoly on TV was challenged by the launch of a subscription-based service known as M-Net, backed by a consortium of newspaper publishers. However, it could not broadcast its own news and current affairs programs, which were still the preserve of the SABC. As the state-controlled broadcaster, the SABC was accused of bias towards the apartheid regime.

In 1996, two years after the African National Congress came to power, the SABC reorganized its three TV channels, so as to be more representative of different language groups. This resulted in the downgrading of Afrikaans, which now had its airtime reduced, a move that angered many Afrikaans-speaking people.

In Aug 71 we agreed to the termination of our consulting agreement with ComTrust.

Meanwhile, in March 1970 Frank and I formed a partnership, called Metro Communications Company, for the purpose of creating a cable program channel in the US. At that time TV was merely rebroadcasting over-the-air programs viewable on TV sets on channels 2 through 13. In May I wrote to André, who was then working in the International Division of MGM, proposing the creation of cable networks carrying films and other programs of interest. Frank and I envisioned 12 to 25 additional channels, having no idea that thirty years later some digital cable systems would have as much as 500 channels.

To explain the concept Frank and I prepared a report “The Cablevision Concept” describing our vision of such channels, including the cost, cash flow, and profitability of the venture.

After going to the convention of the National Cable TV Association in the spring of 1970, I wrote to its president and urged them to lobby the FCC for a requirement that future TV sets have the ability to receive the additional cable channels. This has since come about.

Throughout that year and the next we were having discussions with numerous high-level persons in companies that might invest in our project or supply equipment for it.

In August 1970 we formed a corporation named KenCom Cablevision, Inc in the Commonwealth of Kentucky for the purpose of acquiring the cable franchises in Covington and Newport, Kentucky, two suburbs just across the river from Cincinnati, Ohio. We paid a lobbyist to work on our behalf to get the franchises, but it never worked, and so in April 1972 we legally dissolved the corporation.

By 1973 I was pretty much finished with our cablevision ventures, but Frank continued with variations of the concept, such as pay TV and video rentals in hotels. 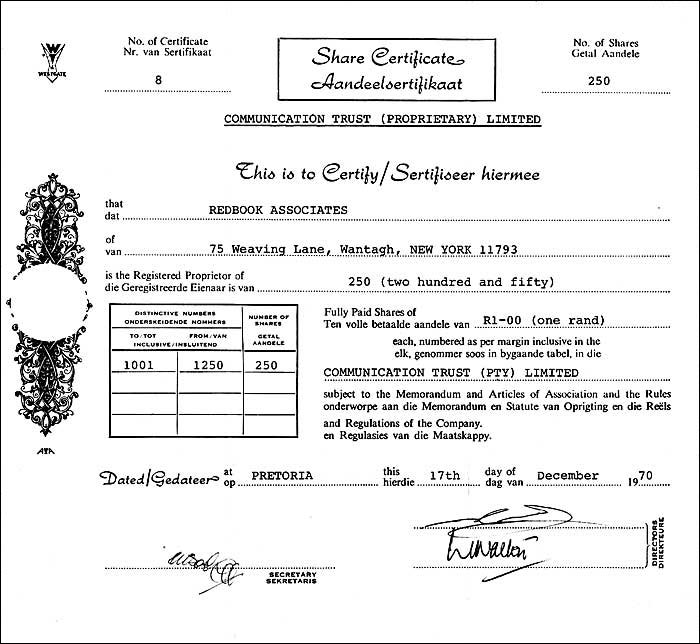