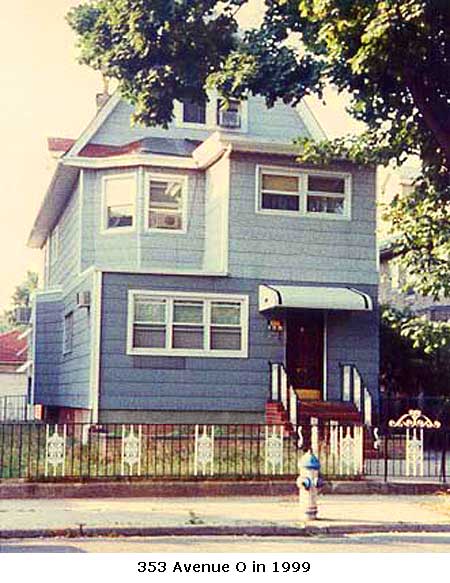 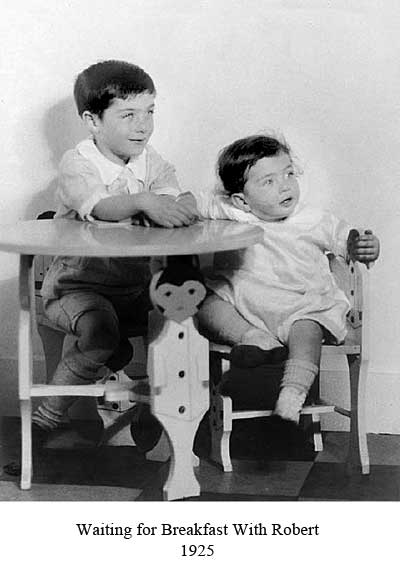 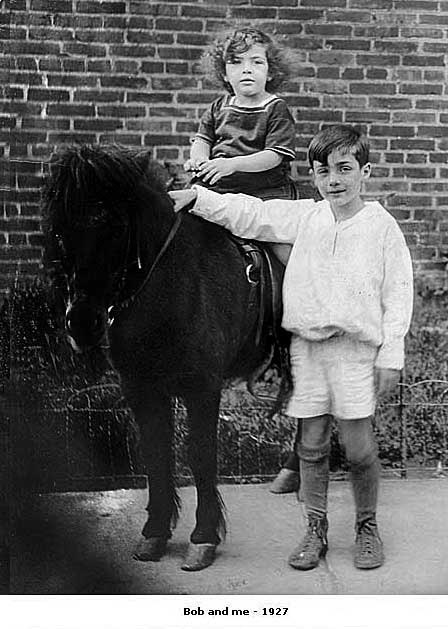 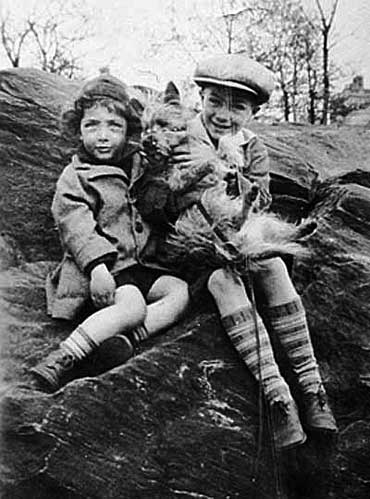 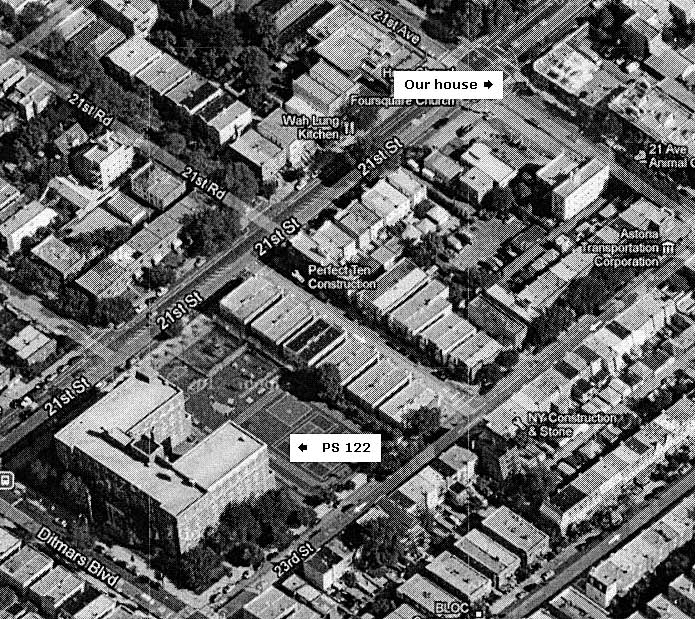 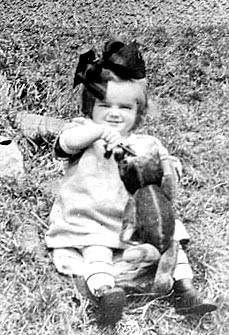 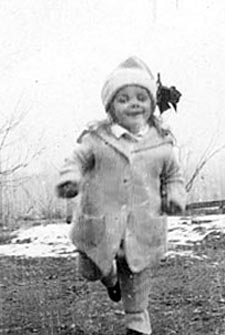 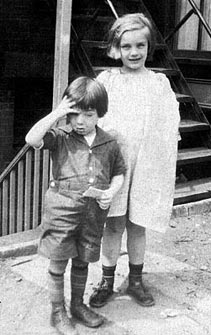 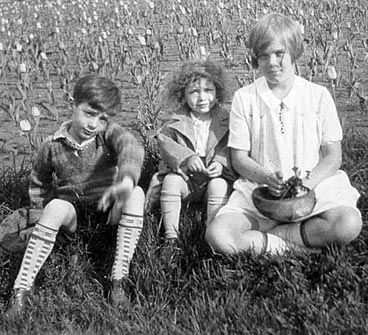 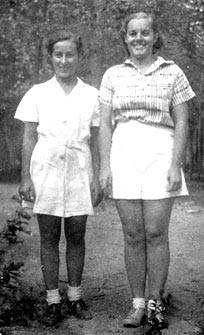 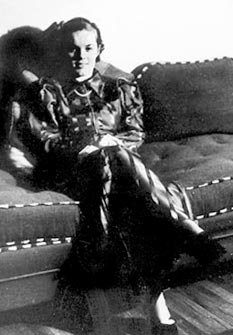 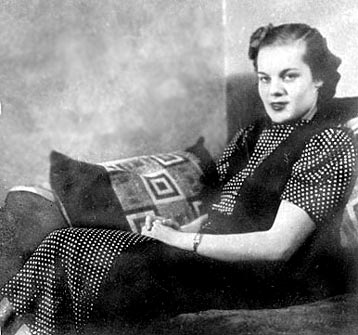 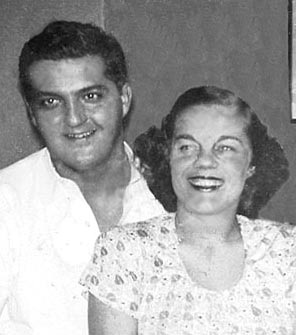 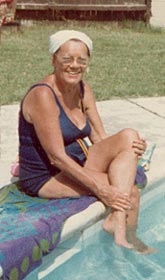 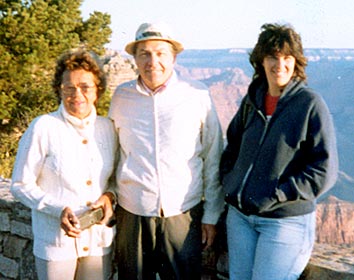 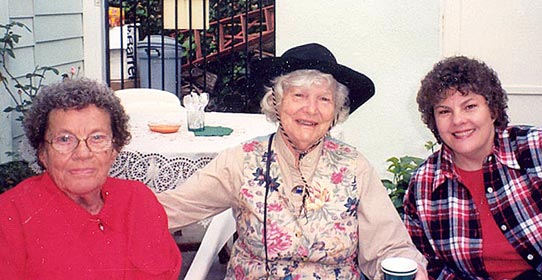 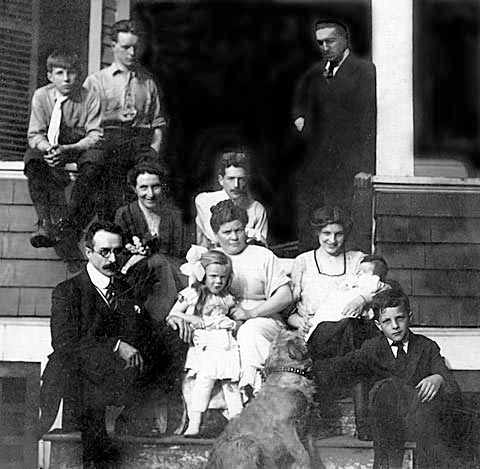 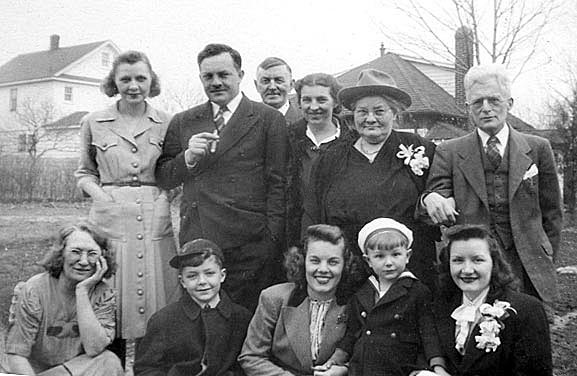 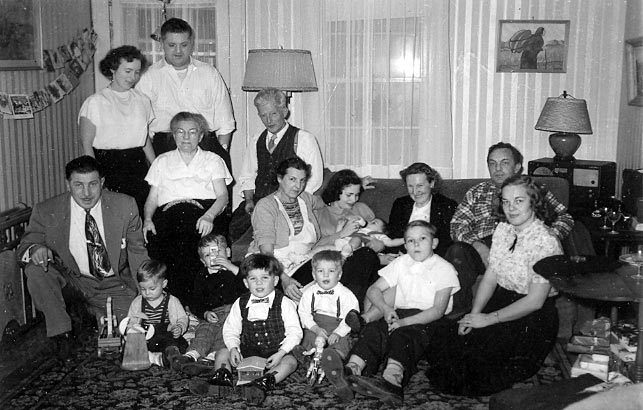 From the house in Brooklyn where I was born, at 353 Avenue O, we seemed to move almost every year. Those were the days before people owned their own homes in New York City, and everyone rented an apartment or part of a two family house. It was an accepted practice to move so that you would move into a newly painted apartment. I suppose it cost a lot less to move in those days. My memories of those days are almost non-existent, but my aunt Ruth brought some of the thoughts back when we saw her in the summer of 1982. At times in the next few years, when Dad was out of work on and off, we would live with my grandmother.

In 1926 we moved to where she was in Jackson Heights (Queens), in an apartment near a firehouse. Then the next year we moved with her to an apartment over an A & P store and a Chinese laundry on Steinway Avenue in Astoria. I guess Dad was doing better in 1928, when I was 4 years old, because we moved to a nice apartment house in the same Long Island City area, an apartment complex called Crystal Gardens. At that time Gram lived not far away in Astoria, between 2nd Avenue and the East River.

My memories are still not clear regarding the apartment itself, but one of my first clear memories is of an incident that took place while we lived at Crystal Gardens. We had a car and would often drive out to see Tante (Caroline) Wortmann, my mother’s great aunt who lived in Amityville.

While we were there one winter’s day I was watching my brother and various cousins throwing snowballs at each other, at the house, and at the car. When we returned to Astoria I remembered the fun we had, and started doing the same thing, but with rocks, and ended up breaking the window on a Macy’s delivery truck (that was before UPS.) It caused a lot of fuss, and I guess my father paid for it, painfully.

While we lived at Crystal Gardens I fell off a swing and broke my wrist, although it was not discovered for some time. Apparently I did not complain about any pain, but my Uncle Emil commented about my holding my hand in an odd way, and xrays found a small break. To that episode I attribute the fact that my left arm is about a quarter inch longer than the right. Then again, maybe everyone is lopsided, and I shouldn’t blame the fracture. Since then, when I have bought clothes that were fancy enough to be altered at no charge, they have had to shorten the left sleeve a little more than the right to compensate for the reduced growth that took place.

By the time I was six we lived on a street that Bob refers to as Casino Place, but I remember the address as 21st Avenue, Astoria. This was probably the first place where I was old enough to memorize the address, in case I got lost. The house was one of many two family row houses in the block, and I think we lived downstairs. The East River was about a block away, and we would sometimes go swimming there, almost under the Hell’s Gate Bridge. Everyone cautioned us not to swim too far out, because the whirlpools there are treacherous, being the source of the name of Hell’s Gate. Of course I didn’t really swim yet, so I guess it didn’t matter.

My best buddy was Johnny Holborow who lived in a house around the corner. His father had been a baseball player in the major leagues in the early 1920’s, having played with Babe Ruth when Ruth was playing for the Boston Red Sox. Not that I knew much about it, but baseball was a big thing with them. Johnny’s older half-brother was, by then, playing in the minor leagues, and Johnny later played some semi-pro baseball. We remained good friends until I was finished with high school.

After we moved to Merrick, and we would go to visit Gram in Astoria, I would go over to visit Johnny, walking the mile or so between their homes. In the summertime they would come out to our house to get away from the heat of the city, and all of us would go to Jones Beach, except Mr. Holborow who (by then a house painter) would be doing painting on our house to repay for the visit to the country and the beach that his family was enjoying. In those days all the paint contained lead, and Mr. H. eventually died from a stomach ailment related to all the lead.

I was also friendly with a boy in an Italian family across the street. I remember that one time I was invited to stay for dinner and it was a big treat because it was macaroni with tomato sauce and my mother never prepared pasta meals.

While we lived in Astoria Bob’s tonsils became infected, and had to be removed. Dad asked the doctor whether it would cost less to have both of us get tonsillectomies at the same time, and since the answer was affirmative, he asked about a price for three, and Ruth was included in the affair.

In New York City, at that time you started school in the first grade. There were no kindergartens, at least not in our neighborhood school, P.S. 122. As do many kids, I really loved my first grade teacher, who was also engaged to our dentist, I believe. The school was a big square building, about two blocks away, and it had the playground on the roof, with a tall fence all around. I don’t remember ever going up there, because I feel it was only for the older children. Click to see the school today, and my class picture. There are now tennis courts instead of a rooftop playground, and our house has been replaced by garden apartments.

For several years we had a car, and the whole family, with Ruth and Gram, would go out to Tante’s in Amityville. She had a great big house on Broadway about a half mile north of the center of town. We would take the Sunrise Highway to what was then its end at Broadway. Years later, when the state was extending Sunrise Highway past Amityville, they bought a little chunk of the north side of her property for the highway right-of-way.

The Southern State Parkway did not exist at that time, and when it finally was built its purpose was to lead people to Jones Beach so it did not go beyond the Wantagh Parkway. By 1932, a year after we had moved to Merrick, it was extended East to Amityville, a mile from Tante’s house. At that time the speed limit on the parkway was 35 miles per hour because it was for “Sunday Drivers” to go sightseeing.

Tante was the matriarch of the family and was the one everyone went to when they first came to America. She was my grandfather Edward Kneisel’s aunt, his mother Henriette’s younger sister Caroline. At various times we would be there with her children and grandchildren, but I guess I was generally left out of the activities, because I don’t recall any children near my age. Tante had five children, Else, who married Daniel Peacock, Hansi (Johanna) who married Otto Kunkel, Paula who married Carl Fuchs, Loni who lived in Hawaii, and Dietz, who lived in New York City. Click here to see see a larger picture of Tante with her daughter Paula, Paula’s husband Carl, and their children Carl Junior and Lotte, and other members of the family. My grandfather, Edward Kneisel is at the far left. The Peacocks and the Kunkels had children about the ages of Ruth and Bob, but lived out of the area at that time, perhaps in Westchester. Paula and Carl owned the Narragansett Inn in Lindenhurst, and their children Carl, Jr. and Charlotte (Lotte) were almost my mother’s age.

The Narragansett Inn was a great big banquet hall, two stories high, and with a big ball field out back. Bus loads of German sports clubs would come out on summer weekends and the place would overflow with crowds. Paula, who was really big and fat, was the cook and I can only remember her as being in the kitchen. She was the first person I ever saw with a hearing aid, and it was about the size of a cellphone, which she would retrieve from her cleavage and hold out for people to speak into. Carl, it seems to me was always in the little cubby-hole under the stairs where people paid their bills, and he also sold and smoked his cigars. The big thrill of visiting there was to get ice cream, usually a “Mello-roll.” Many years later the Inn was sold, then became a fancy catering place, for bar mitzvahs and weddings, and it burned down in July 2001. I believe the last time I saw Paula was at our wedding, and Carl was already dead at the time.

Carl Junior went to Rutgers, played on the football team, and returned home to become a gym teacher at Lindenhurst High, and then a principal. He then went into a Wall Street brokerage, and I think returned to the schools later. We went to his funeral in March of 1980, and there met his three children, Robert who lives in Connecticut, Carl III who has a place (The Palms) on St. Kitts Island in the West Indies, and Elizabeth (Mrs. Steven Fillo) in Princeton. We went to a memorial service for Carl, Jr’s wife Edith in 2002.

During those years as we drove out to Amityville Dad was thinking that it would be nice to move out to the country. He was always impressed with the beautiful elm trees on Merrick Avenue. One day he decided to look around. We drove a few blocks north to the school, and he stopped and peeked in a window. Seeing a teacher in a relaxed mood, sitting informally on the corner of a desk, he decided that this was the town we should live in. We then rented a house a few blocks from the railroad station (Dad was to commute to his job in the city). 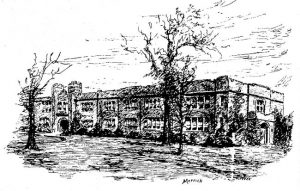 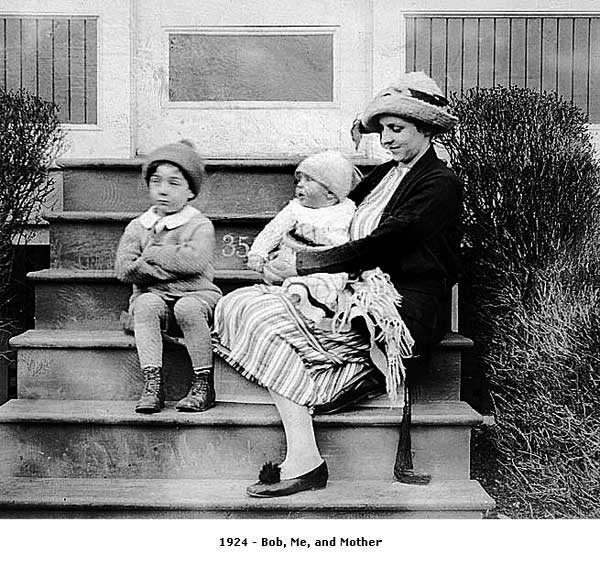 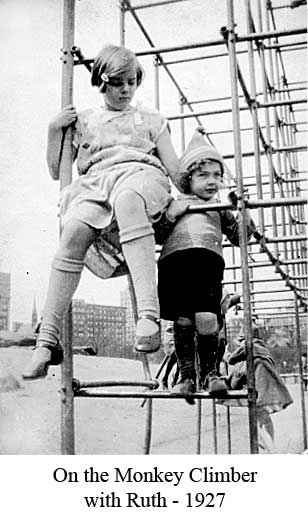 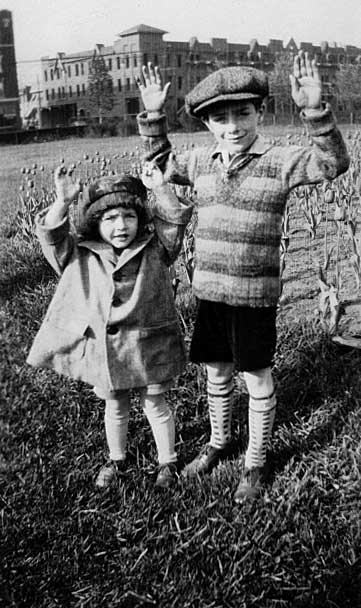 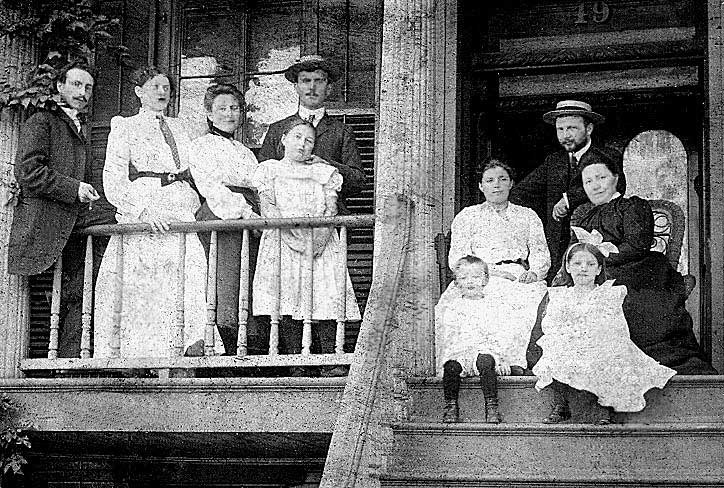