On Monday, June 5th, we decided to look around the town some more, since most places would be closed for the holiday. We wanted to locate the railroad station, in anticipation of going to Romania, so we walked a couple miles until we saw the station. By this time we were tired, and decided it would be better to go back to town.

Fortunately a car then came by, and we hitched a ride. It was a couple from Romania, so Bob spoke to them in Romanian, asking when they planned on returning. Unfortunately, they were going back the same day, and so we couldn’t hitch a ride… since we still had a lot to research in Makö. Too bad.

Back in town we found the restaurant that Baron had pointed out, but they still didn’t have goulash or paprikash. Disappointed, I settled for deep fried chicken stuffed with pineapple, rice and succotash, although we were not quite sure what were ordering. Except for the pineapple part I could have had it all in America.

We went back to the panzio where I napped and Bob went birding for a while. I went through our notes, and got some new ideas on things to look for, so on our way back to town for supper we located the house with a plaque telling where Joseph Pulitzer had been born, and lived, until he was eight years old. We had a pizza and salad at the same place as last night, went back to the panzio, and planned for the next day’s meeting with Csillag in Szeged. 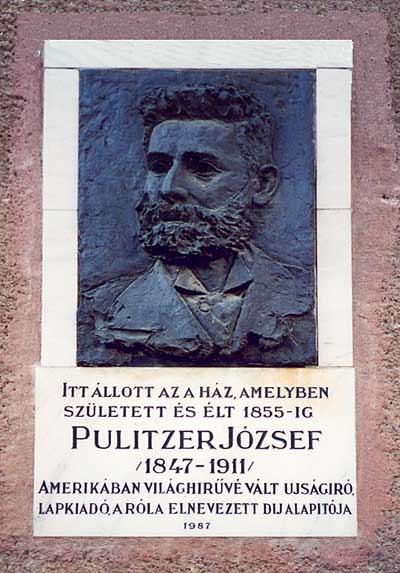