There was one train change before the Hungarian border, and another when we got there. We had to wait about an hour while the Hungarian train came in, and sat there to start the return trip. Then we got aboard the train, and just before the time when it was to leave the Slovakian customs officials came on and said we would have to go to the customs office before leaving.

We took our luggage and went to the customs office where we were interrogated about our trip, and asked how much Slovakian money we were taking out. It was about 3000 krowns ($10) and they said the limit was 100 krowns unless we could show the receipt for its purchase. Bob spent several minutes finding the receipt, and the train was about to leave. The passports were stamped and we dashed for the train as it started to pull out. We yelled, and it finally stopped for us to get on. Much relieved we sat down for the trip to Budapest.

The train ran along the east bank of the Danube for about an hour and stopped at the medium sized city of God. Bob recognized the name of the city, saying he knew of the city, but never expected to see it. He then said that in Dad’s papers he had found a letter, written in old German script, from Hilde (or Ilona) Igloi, who were staying there during World War I. They had been sent to the country because there was so little food in Budapest, and it was more available there. With them was also Mariane Heller, Walther’s sister, who had tuberculosis, and died of it in 1919.

By late afternoon we were in Budapest, and Bob had faith that we’d find a place to stay if we headed south and got to Szeged in the evening, so he said, “Let’s take our chances on finding a room, and get the traveling out of the way.” We had time to kill before the 6:20 PM train was to leave, so we went to the station’s McDonalds, looked over the menu, and had a couple of salads. The prices seemed to be about the same as in the US, and the menu items were also pretty much standard, even if they had some Hungarian words in them. The train then left for Szeged, the end of its run, at the southern border of Hungary near Serbia.

It was after 9PM, just about sunset, when we got to Szeged; we got into a cab and told the driver to find us a pension. He drove a few minutes to the outskirts of the city of 118,000 population to a pension he knew that would be reasonable, but it turned out to be full. He went back to the city center and he took us to a more expensive one, but at least we had a place for the night.

The next morning we had the full breakfast that came with the rent, took a cab to the bus station, and left on the 9 AM bus for Makö, the home of Joseph Pulitzer and the Nagels. It was about an hour’s trip through the lovely, flat, countryside. 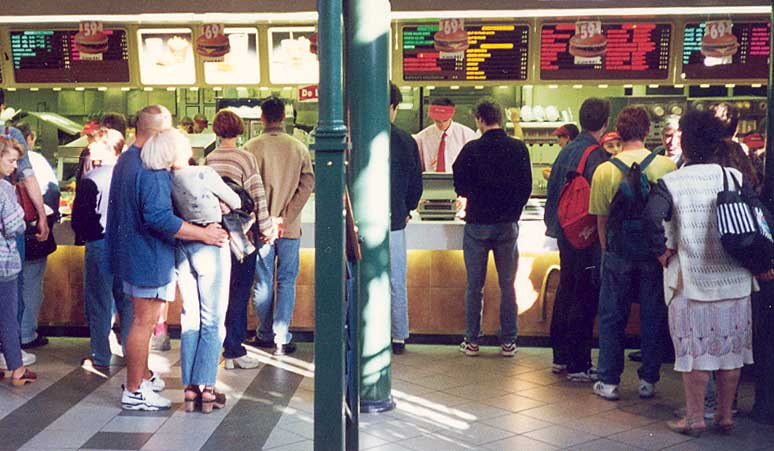