Josefa lived until 1899, dying just before Dad’s ninth birthday. In “Out of My Glass” he stated, “I shall always remember this great-grandmother with intense affection, though I don’t remember she ever spoke one word to me; but whenever I was taken to her flat, she gave me some candied orange peel. I still like it today…

“My great-grandmother considered that she came from people of quality. Her brother had two prominent sons-in-law: Brockhaus, a member of the firm publishing a famous German encyclopedia, and Geibel, a German poet whose productions were reprinted in all high school readers. One of her sisters had married an uncle of Joseph Pulitzer, and to this day I have a grandfather clock inherited from this great-great-aunt.

“So when great-grandmother learned that one of her grand-daughters had become engaged to an official employed in the Austrian Post Office Savings Bank and another to the second assistant-vice-director of the Bozen-Meraner Railway (covering about 20 railroad miles in what is now the Italian Trentino) she exploded: ‘This family is sure going to the dogs – one girl marrying an ordinary letter carrier and the other a ponductor,’ Nor was she the only member of the tribe who was so ‘hoppertahtschert’, which is Viennese for stuck-up and snobbish”

In later notes he commented, “… I remember Josefa when she was in her eighties. She had an apartment in Vienna and a serving woman. She spent her last ten years or so reading the encyclopedia, starting on page 1 of the first volume and conscientiously working her way through 5 volumes before she died. The encyclopedia had been obtained, either gratis or reasonably, through the agency of her sister Charlotte Pulitzer, who was married to the brother of Joseph Pulitzer.”

From our investigations we have found that some of these statements were not quite accurate, but they do give a picture of what Josefa was like. In later information from Dad he indicates, correctly, that Brockhaus and Geibel were actually related to Josefa’s husband, Jakob Weisz, not her brother. Piecing together all the bits of information we drew, and continually revised a family tree. Click image to enlarge.

Bob spent many hours reading about what life was like in Austria-Hungary in the nineteenth century, and then started writing about Josefa as he imagined her life to be. Picking through information from history, he of told times when the Jews were alternately persecuted and tolerated in the seventeen hundreds, how they were ordered to take names, and how they migrated to Hungary. He searched through many microfilms that the Mormons had made of records throughout the Empire, and continued to learn more and more about the family, and he continued to write about Josefa.

On Boxing Day in December 1994, after the whole family gathered at our house for dinner, Clare asked, “I would like you to share something that you would like to do, have, or achieve.”

When it came time for Bob to answer he said, “I would like to see the places that I have been learning about, the places where our family came from.”

Cathie later suggested that I might like to go with him, something I had not thought about. Since Gay had no interest in traveling, especially to the places in Eastern Europe that Bob had been studying, I decided to take the trip with him. 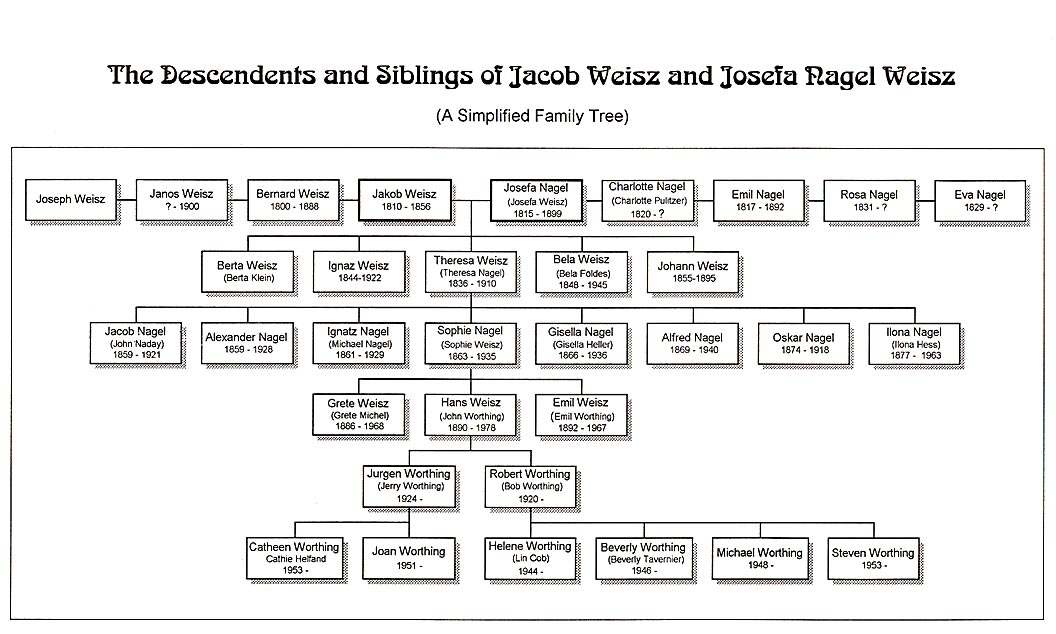